Home Things to do in Barcelona Nit de Sant Joan 2015

The Fiesta de San Juan is a special Christian night and is celebrated on the 23rd of June every year, the night before St. John’s day, which is a public holiday in Catalonia and has been highly important for the Catalan people since the 14th century. During the night of the 23rd of June the Catalans celebrate the birth of the preacher and prophet John the Baptist, because he has a close relationship to the summer solstice, which occurs when the tilt of a planet’s semi-axis, in either the northern or the southern hemisphere, is most inclined toward the star that it orbits.

This happens twice each year, at which times the Sun reaches its highest position in the sky as seen from the north or the south pole. The summer solstice day has the longest period of daylight – except in the polar regions, where daylight is continuous, from a few days to six months around the summer solstice.

During the Nit de Sant Joan, as the fiesta is known in Catalan, the people celebrate the longest period of daylight during the year with fire, which is an old symbol for the sun and Christ. The ceremony is named after John the Baptist, who said that Jesus would be baptized with “fire and spirit”.

The celebration with the fire has its seeds in the belief that it will repel demons from causing damage to cattle and provoking illnesses, malformed children and damage by hail. Therefore, traditionally, people burn corn dollies to cast out the demons and you can see wheels, which are used as a symbol for the sun, during the Nit de Sant Joan.

The Sant Joan festival or often called night of fire is a special event in some parts of Spain (especially Catalonia) that celebrates the midsummer eve during the evening of 23rd of June every year. This night is one of the biggest, noisiest and craziest parties in Barcelona and is celebrated by the Catalans with fire, fireworks, Cava and cakes. There are some public fireworks at Placa de Sant Jaume around 7.30 pm but most of the people from Barcelona celebrate the Nit de Sant Joan on one of the Barcelona beaches. Therefore, we are also going to celebrate this fantastic night as an activity with our students at the beach of Barcelona. If you prefer being more quiet in order to experience the fireworks in a different way and with a fantastic view over the whole city of Barcelona, then we advise you to go to Guinardó or the Carrertera de les Aigües. There you have a marvelous view over all Barcelona and it feels like new years eve.

So enjoy this special night, have fun and happy Sant Joan! 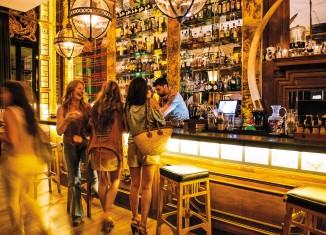 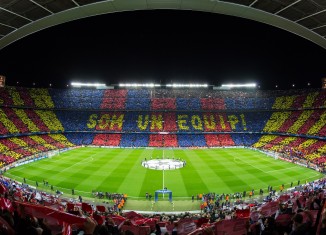 Aug 28, 2015
When FC Barcelona is playing, many bars in Barcelona turn into a sea full of blue-red stripped people chearing at screens and singing the...